I know this is Project Puffin, but oh, the terns..

I was there from the beginning, to witness mom and dad in the throes of courtship, wings drooped, tail erect,

sharp bill pointed skyward as they strut in circles around each other on the rocks in early spring. They acted out elaborate rituals of presenting fish, sometimes playing coy as the other begged like a hungry tern chick. This soon led to the awkward act of, male standing unsteadily on the back of the female, trying to balance and maneuver so as to achieve an assumedley successful copulation. Then came the act of digging shallow nest scrapes, breasts  pushed against the ground as their feet dug out the earth

beneath them. In the early season, there’d be new cups every day, appearing on the edges of the flat rocks and vegetation. And suddenly, magically, they’d be graced with an perfect, delicately speckled egg. So fragile against the heavy weight of the world.

For the next three weeks, mother and father take turns incubating the eggs. Whoever is
not on the nest brings back fish for the other stalwart parent, sometimes begging to take over duties with murmurs and a few gentle shoves. It seemed as if the birds were quite drawn, perhaps instinctively, to incubate, even if their mate already was on the eggs. Perhaps it’s just nice to have an excuse to sit and take in the sights for several hours.

The first sign that the living chick inside is ready to enter the world is made apparent by the materialization on a small section of the egg shell of what we call “starring”. Almost

See the pip through the starring?

imperceptible, these hairline cracks appear in a circular, star-like pattern, telling us that this little creature is just beginning its journey to the outside world. Soon, a tiny fleck of egg is pushed out from underneath, now classifying this as a “pipping” egg. Close inspection of the pinhole may reveal an eggtooth at the tip of a tiny tern chick bill, pushing out of the dark. The tooth is pointed and white with a black tip and is a perfect temporary tool for breaking free of this calcium enclosure. It is
a long and arduous process for this weak, wet, naked little bird and it takes many breaks, breathing, resting, and then at it again. When you get a close look at a bird emerging from the only home it has ever known, you get an idea of how cramped it is in there. These little creatures are doubled over, their heads between their legs with hardly any room for their wings. It’s incredible. They’re almost like a spring, wound up and ready to burst forth, which is basically what happens, but all in very slow motion.

Suddenly they’re out in the real world, wet, matted and vulnerable in the middle of a raucous tern colony. They could emerge on a warm, sunny morning or midnight in the pouring rain. Not 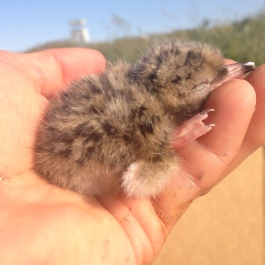 much larger than a silver dollar, these vulnerable, shivering, brand new little birds
need to dry under the protection of their parents. They stay warm under mom or dad’s brood patch, the bare underbelly of the adults, naked during the breeding season to provide heat through skin on skin contact. Any disruption to the colony, either a peregrine, gull or wayfaring stranger, will put the birds up and suddenly the chicks are exposed to the elements and possible depredation. When you’re this small and brand new, there’s no defending yourself in the harsh world of nature.

But soon, the chicks are dry and suddenly very hungry and the role of the adults change from quietly lounging around on the nest to constantly flying out to sea, catching fish and hurrying home to feed frantically begging chicks, again and again and again. For the chicks, the name of the game is hurry up and wait. They’re inert little blobs, either on the rocks or tucked under the vegetation until they somehow can discern their fish-bearing parent out of the constant din of the entire colony. Suddenly they’re up and running, the chicks pitter-patter back and forth on their tiptoes, necks stretched, eyes wide, mouths agape, begging for the imminently incoming meal.

This goes on for a while and we spend much of the summer following the action by carrying out feeding studies from the blinds, monitoring the food that the birds are bringing in for the young. We spend three-hour stints watching around six, previously-marked nests and write down every feeding that occurs at each one, including what the food item was, how large, which adult provided it, which chick received it and the time of arrival and departure of the provider. It all happens in a flurry and, when you have many nests feeding at one time, you’re really scrambling to get down all the data. And those fish go down quick, with the chicks scrambling madly to win the prize and swallow it down before a sibling or unwanted intruder nabs it. This constant influx of food make for quickly growing little bodies, sometimes gaining as much as 15 grams in just a day or two.

And, indeed, it’s only about a month later and I’m looking down upon my feeding study nests and watching eager flapping as the tern chicks prepare their muscles for flight. My charges here are common terns, whereas many of the arctic terns have already fledged (they nest a little earlier than COTEs). Everywhere you look, there are chicks popping up like popcorn off the rocks and out of the grass, taking flappy-jumpy hops that progressively get a little lither, a bit more buoyant, until suddenly a small gust of wind catches hold and surprises them into flight. Their stubby tail feathers haven’t grown all the way in at this point, so they’re a bit awkward at first but grace takes over as they wheel around the colony for an entirely new view of a world I can only imagine. But reality strikes when an impatient adult divebombs from above, sending it careening into the grass, wings splayed, landbound once again..until it gathers up the courage for another attempt.

You’ve got a long way to go, little chicken.

Tropical guide and naturalist at Tranquilo Bay Eco-Adventure Lodge on Isla Bastimentos set within Panama's Caribbean Bocas del Toro archipelago. My aim is to share my passion for birds and the awesome biodiversity of the tropics while spreading the word about the importance of environmental conservation.
View all posts by Stacey M. Hollis →
This entry was posted in BirdJob, Project Puffin, seabirds and tagged chicks, colony, eggs, fledging, flight, nests, seabirds, terns. Bookmark the permalink.

2 Responses to They’re growing up