So while I may understand the rage surrounding this summer’s release of interactive app video game Pokemon Go, I think I found a version even more perfectly suited for someone –a.k.a. a bird dork – like myself: an online bird checklist database known as eBird.

Watching birds, or rather, being aware of all the ones that exist with my audio/visual realm at just about every second I’m in a conscious state, makes for a rich view of life and

one’s surroundings. While I walk, jog, drive, bike or daydream through life, I’m unconsciously noting in my head what birds I catch out of the corner of my eye, the sound of their call note or the shrouded flick of a wingbeat in the shrubs. While I enjoy writing about or photographing the birds I’ve seen, I’ve never been much one for making lists of what I’ve encountered. Some people are meticulous about recording new birds as they see them, keeping years and years of bird lists. While I do have journals with the overall amount of species I’ve encountered on various different adventures and travels, I don’t keep it all in one place, I don’t have the coveted “Life List”. I have no idea how many bird species I’ve seen in my lifetime.

I’d heard of eBird and how avid birders, young and old, are putting it to good use, I only decided to finally give it a go this past September, my final month out on Project Puffin‘s tern and puffin island, Seal Island National Wildlife Refuge. Seeing as how I’ve been a birdwatcher for my entire life, why not start on an uninhabited island that I’ve gotten to frolic around on all summer, which just so happens to be covered by unexploded ordinances and is therefore closed to the public? Aside from us researchers, the only eBird checklists made for Seal Island are from those who’ve only boated around it. One of the perks of being a field biologist (until that gets me blown up).

Working on my very first list, it was immediately exciting because I got to sit out on our cabin porch, staring out over the island, watching random migrant songbirds moving

through. Even when you don’t see anything especially out of the ordinary, making a unique list for that day, that time, that location, those species is important. It’s your contribution, your mark, what you’ve gathered and just jotting it down won’t just mean it’ll get lost in a dusty drawer ages from now. Instead, the information you’ve retrieved will get instantly downloaded into a huge database through the esteemed Cornell Lab of Ornithology. And by opening up this ability to the wider birding public through the ease of an app on your phone, information can be uploaded constantly.

In addition to the influx of data, there is also the invaluable investment by individuals who are even entering backlogged data they’d been keeping before the advent of the ebird phenomenon. As long as you’ve got the date and time and place, entering this information can be added to historic trends that can be extrapolated including bird abundance and distribution at a variety of spatial and temporal scales.

So on the 10th of September 2016 on Seal Island NWR, I started my first contribution as an eBird citizen scientist. That morning we had three different empidonax flycatchers 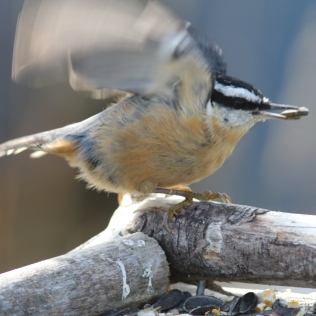 landing on one of the ropes that batten down our composting outhouse. Red-breasted nuthatches “meep”ed as they skittered under that porch awning and pecked away at driftwood. We had few young yellow-crowned night herons that hung around for most of the second half of the season, making them seem more like neighbors than confused wayfaring strangers. Even the influx of juvenile purple finches that hung around camp for days was exciting to add to the list.

Now that we’re into October, I’ve already made a total of 21 checklists so far throughout Maine, Virginia, Maryland and Florida with a total of 117 different species observed. I’m calling it my official Life List. I don’t mind starting from scratch. It makes getting the next “life” bird all the more thrilling, even it’s not especially rare. And since I’m not officially working in the field now that the season is over, it makes me feel like I’m contributing to something worthwhile. We all are.

So now I have lists and data that tell me all about the species I’ve seen over the course of this Fall season and, not only can I look back at my lists, photos or notes on my sightings, I can look at everyone’s accumulated data organized depending on the area or time of year. I can find out what certain birds are migrating through or if any rarities are being seen nearby. While it’s all still new and shiny for me, I can see this being an ingrained hobby to add to my already-ingrained hobby. I was in Florida a couple weeks ago and, during a solo jaunt through the woods looking for Fall migrants, I happened across a few eBirders more than twice my age (and with a life list probably many multiples larger than mine). It’s evident that I’m behind. Gotta catch up with the times..gotta catch ’em all!

Tropical guide and naturalist at Tranquilo Bay Eco-Adventure Lodge on Isla Bastimentos set within Panama's Caribbean Bocas del Toro archipelago. My aim is to share my passion for birds and the awesome biodiversity of the tropics while spreading the word about the importance of environmental conservation.
View all posts by Stacey M. Hollis →
This entry was posted in birds, eBird, Project Puffin and tagged birds, birdwatching, citizenscience, conservation, eBird, migration, research, songbirds. Bookmark the permalink.