capture my attention, captivating me with enraptured awe. Here I was first exposed to the wonder of the rich biodiversity of the warm southern climes. I saw my first Roseate Spoonbills, exotic in both color and shape. I first heard the raspy bellows of Sandhill Cranes echoing across the shores of Myakka Lake, proclaiming their existence to the heavens. With their rose pink faces and downward arching beaks, I loved watching gangs of White Ibises roam throughout the residential areas, prodding the soft earth as they made their way across the neighbor’s lawn or the shallows of a manmade lake. When a flock flies overhead, their pristine white feathers glitter in the sunlight , wingtips dipped in black ink.

And the beach holds an entirely different set of fascinating and wonderful birds: There’s the never-ending onslaught of ospreys and pelicans and terns that hurl themselves into the rich, crystal blue-green waters of the Gulf of Mexico, providing endless entertainment as I jog above the lapping waves along Siesta Key.

Ring-billed and Laughing gulls lounge on the powder-soft sands that make this beach famous, interspersed with groups of Royal, Sandwich and Forster’s terns. 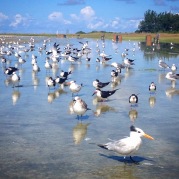 Flocks of Black Skimmers contrast against the light colors of their fellow seabirds, their black, uneven bills with the bright orange base creating a comical effect. 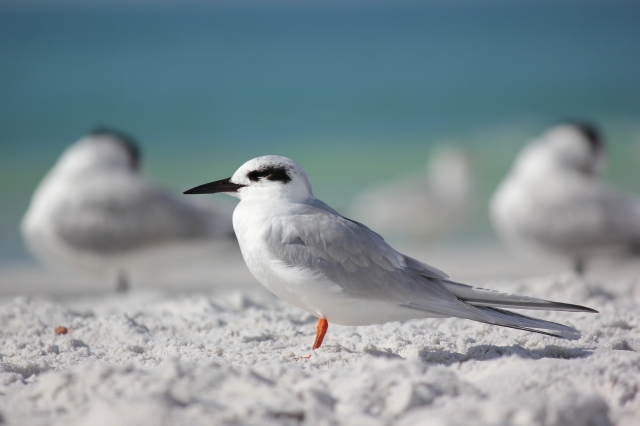 Most of the birds seem almost unrecognizable from how they appear during the breeding season, their winter plumage softening the stark contrast between blacks and whites.

For the “cold” months, the birds spend their time resting in large flocks on the beach, heads tucked, or preening for long, intensive stretches. Many of the birds will return to northerly nesting grounds toward the end of winter, their feathers shifting back into breeding plumage to look snazzy for yet another nesting season. But for the winter, they rely on southern beaches to pass the days until the time to breed arrives.

As I grew as a birdwatcher, my attention was drawn to the smaller shorebirds, darting along in groups, their tiny legs a blur as they skitter across the sand and shallows. Sanderlings are always the most prolific, their silvery white, plump little bodies seemingly propelled by batteries, downturned heads busily searching for invertebrates.

Smaller, darker Least Sandpipers are interspersed with Semipalmated Plovers and Ruddy Turnstones as lone Willets pick their way through the lapping waters on long thin legs. Solitary Black-bellied Plovers, lacking in the key descriptive feature at this time of year that gives the bird its name, forage in the softer sands up among the shallow dunes, occasionally emitting a sad, drawn out, questioning whistle. 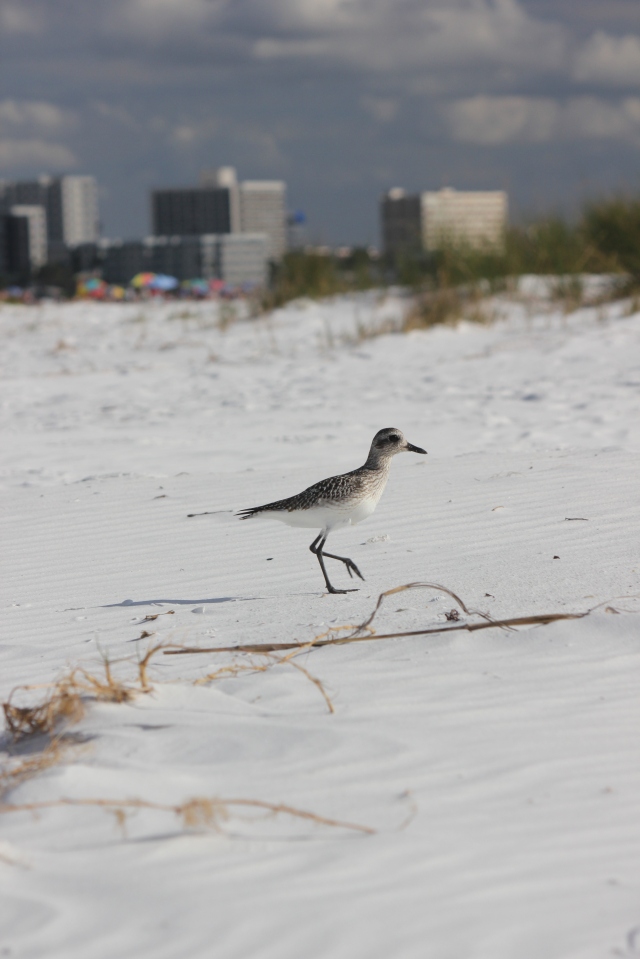 In addition to birds on the beach, you may also be treated to the occasional sight of a wintering common loon feeding among the soft waves, its stunning black-and-white checkered plumage from the summer traded for the soft grays of winter; or a view of the majestically magnificent frigatebird soaring with a starkly pointed wings, forked tail and crimson throat patch. 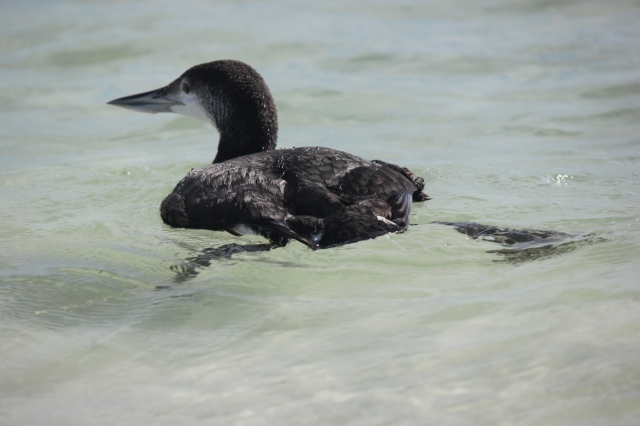 My favorite of the Siesta Key shorebirds is the mouselike Snowy Plover which occupies Siesta Key all year, nesting among the dunes in the spring (sometimes much to the chagrin of some beach goers indignant that they must share the beach with anything other than other humans). These birds, designated as state threatened are protected by biologists and volunteers, who monitor hatching and nesting success (or lack thereof) and rope off and protect sections occupied by these vulnerable nesting birds.

Among the many threats to their survival are gulls and crows, hawks, raccoons, and without doubt, the oblivious human, unaware of the importance (or even existence) of this threatened species and the delicate chicks that freeze still at any sign of danger, flattening themselves into the sand. Foot traffic in these sensitive areas can lead to disastrous results.

According to a snowy plover volunteer I spoke with, there were twenty-two adults this year on Siesta Key but only five plover chicks successfully fledged from eight nests. This was apparently the largest number achieved in recent history thanks to the tireless efforts of volunteer nesting-shorebird stewards to educate the public and provide protection for the birds.

It’s important that people come to terms with the fact that the beach doesn’t just belong solely to us. It’s hard not to feel indignant when your easy beach access or favorite place to put down a blanket and enjoy the sea breeze is suddenly not allowed, but through outreach and education, people can come to the realization that these birds are special and just as important as all other species, including us. Since their populations are threatened by our own actions, it’s up to us to take responsibility to be sure that we don’t wipe them out through carelessness and lack of awareness. Let’s share the beach so generations from now, our children’s children’s children can experience the beauty and biodiversity of life that this beach and our planet support.

Thanks for reading! Stay tuned for more posts in my Pining for the Field series, which documents my fieldwork with birds around the US as well as into Puerto Rico and Canada.

Tropical guide and naturalist at Tranquilo Bay Eco-Adventure Lodge on Isla Bastimentos set within Panama's Caribbean Bocas del Toro archipelago. My aim is to share my passion for birds and the awesome biodiversity of the tropics while spreading the word about the importance of environmental conservation.
View all posts by Stacey M. Hollis →
This entry was posted in birds, birdwatching, seabirds, video and tagged beach, florida, gulls, ibises, sandpipers, sarasota, seabirds, shorebirds, siesta key, skimmers, terns. Bookmark the permalink.