Since I rolled into Seal for only the post-season this year, I thought I’d brush up on the deets of what went on this summer with our beloved terns and puffins as well as the guillemots, razorbills, eiders and all the rest!

Keenan was once again the Island Supervisor, although was missing his co-command, Isabel, who started a graduate program that we were so excited to find out about last year while on the island! This will be Keenan’s second season as sole Seal supervisor (alliteration much?) which he also was in 2015 so he was absolutely up to the task this year and then some! 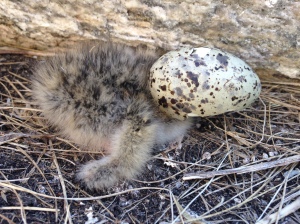 The puffins and terns start their nesting season in late May and, while the tern colony declined by several hundred pairs this year, the puffins had an excellent turnout with an estimated 592 active burrows on the island, surpassing a previous high of 568 pairs. The Black Guillemots are doing great on the island, numbering well over 700 pairs. About fifty pairs of Razorbills nested on the island this year, which has gone up exponentially since back when I first came out to the island in the early ‘aughts when we were excited to find even just one or two nest burrows! The island also boasts a healthy nesting population of Leach’s storm petrels, Great and Double-crested Cormorants, the ever-present Herring and Black-backed Gulls, as well as shy Common Eiders, plucky Spotted Sandpipers and our flitty friends around camp, the abundant Song and Savannah Sparrows.

Common Tern (COTE) productivity was really good this year, says Keenan. Now, when we say “productivity” this means the average number of chicks hatched and fledged per nesting pair, usually a number somewhere between one and two chicks per pair. To determine common and arctic tern productivity, the team monitors nests within four pre-installed study plots (~1’ mesh fenced enclosures) set throughout the colony from which productivity and growth data are collected on a regular basis for the entirety of the nesting season. 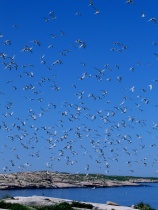 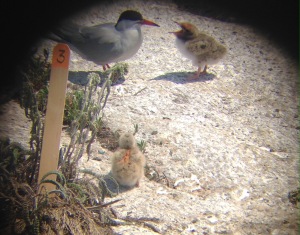 For each pair of common terns, on average, 1.15 chicks per pair fledged  this year, which is actually a great outcome, this being the third-highest productivity for COTEs since monitoring first began on Seal in the early nineties. Last year, when I was here for the duration of the nesting season, the COTEs only fledged 0.5 chicks per pair, averaging to what basically amounts to half a chick per pair. This is not sustainable for the future of any nesting colony, neither for population maintenance nor for population growth. Last year was a particularly bad year for the terns on Seal thanks to nasty weather at key points in the chicks’ development, along with an inexplicably poor food supply. But this year resulting in a more than doubling of productivity is a hopeful outcome, however uncertainty in food availability from year to year obviously does raise concerns for the future.

Arctic Terns (ARTEs) productivity also went up from last year from 0.79 to 1.1 chicks produced per nesting pair. While the year was successful for tern productivity, there was actually a significant drop in the size of both the arctic and common tern colony size. The COTEs dropped from 1,300 to 1000 pairs nesting on the island between the 2016 to 2017 season while the ARTEs declined from 950 pairs to 700. While we don’t know the exact reason this happened, there are some theories. With the changes in food availability, especially last year having been such a poor year for the birds, they may have moved to a different location in search of a more reliable food source for the nesting season. Keenan mentioned that a common tern colony in his home area of Cape Cod, Massachusetts had over 11,000 pairs of common terns and seems to be growing by about 1000 pairs per year with what appears to be great food availability and productivity success. Perhaps Seal Island terns have found that colony or another of any of the seven Project Puffin-managed islands where the food supply might be more reliable. While we are not 100% sure about any of this, our close monitoring of tern populations along with banding chicks and adults might reveal what’s happening with our birds in the future.

The puffins had a great year this season, bringing in huge bill-loads of sandlance, hake and herring and haddock. It was especially exciting to see herring coming in, says Keenan, because out of all the fish these birds are eating in the Gulf of Maine, herring have the highest fat-content This means more calories “per package” which is great for chick development and growth. This further emphasizes that the kinds of fish being brought in by parents to their chicks can be more significant than the amount, because, as some might recall, several years ago the famed “butterfish year” left many chicks starving because the baby birds were unable to swallow the large, coin-shaped fish which piled up next to the dying birds because

that’s what their parents were finding the most of out at sea and therefore bringing in to feed their young. In 2005, Seal supervisor Carlos and I observed a high amount of euphausiids (krill-like invertebrates) brought in by the adult terns to their chicks, this over-abundant food source which seemed to lack the nutrients that fatty, bony fish could provide and could have had a detrimental impact on the productivity that year. All speculation, but you can see how many variables come into play when it comes to raising a healthy chick!

Something interesting that we’ve seen more of in recent seasons is that the puffins are starting to nest in new areas of the island where they haven’t typically nested in the past. The majority of the colony nests around the perimeter of the tern colony on the northeast point of the island but now they’re spreading out to new areas southward down the island. This is exciting, says Keenan, because it shows potential for increased growth to the colony with more available areas being identified by the birds for potential nests While it’s hard to monitor these additional nest locations being that most of our attention is on the main colony where most of our blinds are located, the Seal island team does its best to find new burrows as they occur to keep track of the expansion.

With this year’s abundant and healthy food supply, there’s been more birds loafing (hanging out on the rocks) as observed by the Seal island team and viewers of the explore.org cams compared to last year. This is a result of the birds not having to spend as much time searching for a sufficient food source, giving them more time to rest and socialize, meaning more of a show for our beloved cam viewers over the course of the season!

Before Keenan and the island team left at the end of the nesting season, they had an all-time high count on August 11th of 1,012 puffins rafting offshore. These congregations occur as the birds get ready to move out to sea for the winter. By the time Frank and I arrived, we only saw a couple remaining birds floating on the choppy waters. Waving goodbye, I can see them in my mind’s eye, riding the swells over the continental shelf eastward off the shores of New York state, where they’ll endure the freezing winter, floating and feeding and waiting for the spring to come.

Next post I’ll be getting up close and personal with our explore.org puffin chick Conrad!